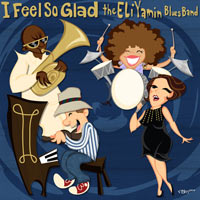 Eli Yamin is a Steinway Artist.

This CD is dedicated in loving memory to Dr. Billy Taylor

Special thanks to: Bob, Kate, LaFrae, Jim, Cliff, Lorraine, Manika, Jayme and everyone in the audience who stomps, sings and claps their hands with us.