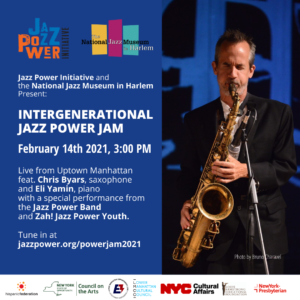 Hosted by Jazz Power Initiative’s Managing Artistic Director Eli Yamin, this Intergenerational Jazz Power Jam will feature a duo performance by Chris Byars and Eli Yamin as well as lively conversation about Byars’ current work as Team Leader for NYC Test and Trace Team 76 and recorded video performances from Byars colorful career, spanning from a Bud Powell commission for the WDR Big Band to a guest appearance with an Algerian expat folk orchestra performing in Algeria for the first time in over 50 years.

Composer and saxophonist Chris Byars has released 15 CD’s as a leader and toured over 50 countries as a jazz ambassador. His segment will be followed a Jam featuring performances by artists of all ages including Byars’ saxophone student from Lebanon performing Thelonious Monk’s favorite hymn “Abide With Me” in honor of Black History Month.

To submit a video of a music, dance or poetry performance for the Jam up to 5 minutes, artists of all ages can fill out this survey here.

“As the pandemic continues we are encouraged by community minded artists like Chris Byars who use their music and other skills to uplift spirits and lend a hand to those who need it most.” Eli Yamin, pianist and Artistic Director of Jazz Power Initiative. 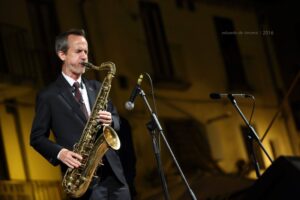 Chris Byars is an award-winning saxophonist, bandleader, arranger/composer, conductor, and educator based in New York City. He has been performing festivals, concerts, educational workshops, and jazz clubs since 1987. His 15th commercially-released CD as a leader, On the Shoulders of Giants, was released in March 2020.

A frequent guest of German Radio Jazz Orchestras, he was recently the arranger for WDR Big Band’s Tribute to Bud Powell, starring guitarist Pasquale Grasso in April 2019, and NDR Big Band’s Bird @100 in August 2020. He has composed extended works for WDR, NDR, Riverdale Sinfonietta, Harlem in the Himalayas, and the Chamber Music America New Works Program.

As a Cultural Ambassador for the U.S. State Department, Chris has traveled to over 50 countries. His most memorable performance was with the Algerian folk group El Gusto! who invited him as a special guest in their 2015 Homecoming Concert in Algiers.

Eli Yamin, a community-oriented pianist, composer and educator based in Upper Manhattan has performed as a jazz and blues ambassador for the United States, in over 25 countries and in the U.S. at Lincoln Center, Carnegie Hall, the Kennedy Center and the White House. His recordings include You Can’t Buy Swing with his jazz quartet; I Feel So Glad, with his blues band; Louie’s Dream, with New Orleans-based clarinetist Evan Christopher, and Live In Burghausen with jazz icon, Illinois Jacquet. His three youth-centered musicals: Nora’s Ark on climate crisis and collaboration, Holding the Torch For Liberty about women’s rights and Message From Saturn, about the healing power of the blues have been performed internationally in four languages and across the U.S., bringing diverse communities together through jazz and blues to tell socially uplifting stories. Eli is the co-founder and Managing Artistic Director of Jazz Power Initiative and the author of So You Want to Sing the Blues: A Guide For Performers published by Rowman and Littlefield in collaboration with the National Association of Teachers of Singing (NATS).

Jazz Power Initiative (JPI), a non profit, 501 (c) (3) organization since 2003, serves over 3100 New Yorkers and visitors annually – students, teachers, artists, seniors and general audiences, ages 8-80+, to promote youth development, and build more creative and inclusive communities through jazz music, theater and dance education and performance. Led by highly experienced teaching artists who are award-winning jazz, theater and dance professionals, JPI offers multidisciplinary training, scholarships and performance opportunities to New York City youth, ages 8-19, from every economic and social milieu at low or no cost to families, with extended outreach to students in under-served New York City public schools in Northern Manhattan. We currently engage over 500 students and their teachers annually, providing after-school instruction mainly in Harlem, Washington Heights and Inwood (where our offices are located) and the Bronx. Our programs include after-school youth masterclasses at the United Palace; our monthly Jazz Power Jam at the National Jazz Museum in Harlem; local community senior center workshops, and our annual Jazz Power Institute at Lehman College (CUNY) for artists and educators.

About The National Jazz Museum

The National Jazz Museum in Harlem is a thriving center for jazz that stimulates hearts and minds, and reaches out to diverse audiences to enjoy this quintessential American music. The Museum is committed to keeping jazz present and exciting in the lives of a broad range of audiences — young and old, novice and scholar, artist and patron, enthusiast and curious listener. Each year, the Museum produces and presents nearly 100 free programs in New York City, engages hundreds of professional jazz artists and reaches nearly 20,000 people from around the world.